Reinventing the Wheel – Airless Tires are Closer to Becoming a Reality

Although they’re not quite there yet, it looks like someone might be releasing an airless tire for bikes pretty soon, and cars should follow shortly thereafter. At least, if you’re listening to the hype, that’s how it seems to be going. 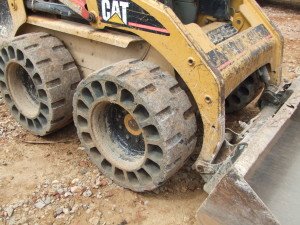 Actually, the experts see non-pneumatic tires still 10 years in the distance, which is disappointing to anyone who has dealt with a flat on a car or bike anytime. In addition to the functional attraction many people have to the airless tire, there’s the environmental impact to consider as well.

The globe is littered with mountains of abandoned bald tires, which are not biodegradable. To the contrary, they leak chemical pollutants into ground water. They’re an eyesore. They fill the air with a nauseating chemical-ly hot rubber smell in the dog days of summer. But there is an alternative on the horizon.

Bridgestone announced its own airless tire last year; it seems to have been tested on everything from bikes to Army jeeps, and it sounds pretty exciting. Imagine being free of punctures and flat tiresforever! They also say their non-pneumatic tire is environmentally friendly – although they clarify it, sort of. Bridgestone says that the tire is more environmentally friendly than the black rubber. So there’s that.

The Bridgestone concept tire  uses a spoke framework made of thermoplastic resin and configured along the inner sides of the tires to support the weight of the vehicle,  the same way pressurized air works in regular rubber tires. The thermodynamic resin is 100 percent recyclable, and Bridgestone foresees an ongoing cycle of recycling and re-use, since the resin can be re-formed again and again simply by reheating.

Michelin has also been busy working on an airless tire, which the company calls the Tweel – a combination of  the words “tire” and “wheel,” which they first announced in 2005. The Tweel is a solid inner hub surrounded by polyurethane spokes, organized in a series of wedges. A shear band is stretched over the wedge spokes to form the tire’s edge that comes in contact with the road. The strength of the spokes combined with the tension of the shear band replace the air pressure of a typical tire to support the vehicle.  Finally, a tread is fitted to the shear band, and the hub is mounted to the axle.

Other, lesser known tire and rubber companies are also working on their own versions of the airless tire, so the race is on. Britek Tire and Rubber has been working on its own version for years – the Energy Return Wheel, a sophisticated wheel that uses a rubber tread stretched over an inner structure made up of cushions and rods that provides give to the tire. Britek also claims the Energy Return Wheel loses less energy when it hits the bumps and experiences compression.

The Britek tire is just another version of the same concept, but the frame is lighter, and “the rims are carbon fiber with rubber stretched tight around the outside,” according to Britek.

It may be a race to the finish line to see who is the first to market a workable airless model. But don’t give up your patch kit just yet – even once they are released, depending on the cost and availability of sizes, there may still be some wait time. Enjoy these last years with your pneumatic tires. Take photos for future generations to stare at in wonderment, along with other relics like your desktop PC, digital pagers, and first generation iPhone.

Regardless, the riding experience could be very different once we’re all traveling on the airless version, so ride like nobody’s watching!

There are so many positives to the prospect of puncture-proof tires, it’s frustrating to know it may still be another decade before they become widely available. Patience, however must prevail. They are reinventing the wheel, after all.

Reinventing the Wheel – Airless Tires are Closer to Becoming a Reality was last modified: September 23rd, 2017 by Brian Peterson