When it comes to safe cycling, wearing a helmet and outfitting your bike with adequate reflectors and lights are important, but they’re not enough. The number one safety measure every bicyclist should take is to learn how to avoid being hit by a car.

Commuting by bicycle is up 47 percent in the U.S. since 2000, and long-standing and potentially deadly arguments between cyclists and motorists over road rules has never been more apparent; many motorists think nothing of cutting bicyclists off, squeezing them off the road, or creating a treacherous environment for riding a bike on a busy street. 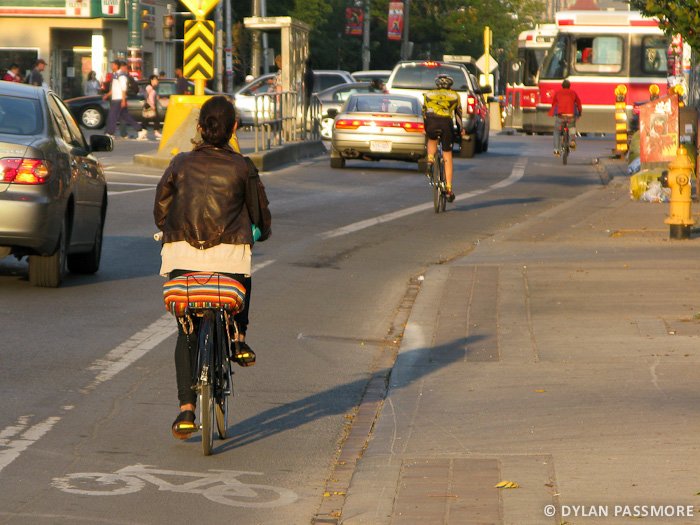 In return, motorists often accuse cyclists of disobeying rules of the road by blowing through traffic lights or stop signs, or taking up entire lanes on busy streets when bicycling in a pack.

While both sides have valid gripes, safety should be an issue that both motorists and cyclists can commit to.

Some auto manufacturers are installing new technology that combines advanced use of cameras and sensors to avoid hitting cyclists with whom they share the road. Volvo’s Pedestrian and Cyclist Detection system, for instance, operates through radar in the car’s grill and a camera pointing towards the front of the car from the interior rear view mirror, constantly monitoring the road ahead. If a cyclist heading in the same direction as the car unexpectedly swerves in front of the car, sensors alert the car’s central control unit, sending an instant warning message to the driver and causing the brakes to be automatically applied.

Here are some tips for bicyclists to avoid this type of collision:

1. Slow down enough to make sure you can come to a complete stop if you need to. Although it may be tempting to up your speed, resist the urge when traffic is heavy or visibility is limited due to weather conditions or the darkness of night.

2. Install a headlight if you don’t already have one, especially if you ride at night. Not only is it required by law, it makes you much more visible to motorists – even during the day, if it has a flashing mode. The latest LED versions work on battery power ten times longer than the old-style lights. Wearing a headlamp on your head or helmet is the best option, since it allows you to move your head toward a driver when you suspect they don’t see your light.

3. Make a waving motion with your arm if you can’t make eye contact with the driver. Make it as easy as possible for them to see you by waving left and right – drivers are often distracted and simply don’t see a cyclist, even one heading straight toward them.

4.  Fit a bell or horn to the bike – although the U.S. doesn’t require, we recommend them. Any time you need to get a driver’s attention in a hurry, a loud horn can mean the difference between staying safe and getting hit. A traditional bell can be useful in low traffic environments, like residential streets and parks.

5. Ride to the left for better visibility.  If you tend to hang close to the curb to avoid being hit from behind, you may be riding out of the driver’s field of vision. The further to the left edge of the bike lane you can get, the more likely you are to be seen by drivers who are busy focusing on the middle of the road. In addition, if a motorist pulls out into your path, you have a better chance of moving further left or speeding up to get out of the way before impact. Riding left can even make it possible, if necessary, to roll easily onto the car’s hood during a collision as the driver slams on the brakes. The further to the left you ride, the more safety options you have. Statistics show that bicyclists who ride too far right, thus reducing their visibility to motorists, have a much higher chance of being hit from behind than cyclists who ride far enough left to be seen.

There are exceptions to every rule, of course; there are circumstances in which riding right is actually safer, such as on fast roadways with few cross streets or intersections. On roads with multiple cross streets and lower speed limits, you’ll ride farther left.

Avoid busy streets when you can, signal your turns, and leave music players and cell phones off if you are serious about safe cycling.

Do some research on safe cycling in different roadway conditions so you can be prepared for different hazards in different environments.

Safe cycling habits can keep you pedaling for as long as you like. It only takes one serious collision to end your bicycling options.

Stay safe and enjoy every ride.