If you read the news, you’ve heard of fracking. The word is printed boldly on paper, flanked by quotes from politicians full of promise, worried residents, and authoritative scientists. Everyone has an opinion on the process – and separated into the “for” and “against” factions, it’s often difficult to make sense of which conviction is the right one. 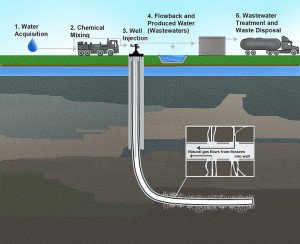 “Fracking” stands for hydraulic fracturing. In simple terms, the process extracts natural gas from shale, which is located beneath the Earth’s surface. Pressurized water is essentially injected into the rock, which creates a release of natural gas. The method has been used since the 1940s, though it has largely hung on the periphery, overshadowed by oil and coal. According to Chatham House, shale gas constituted a mere 1% of the United States’ gas stock in 2000; in 2011, it made up 25%. European countries also have massive shale reserves that are ideal for fracking – but they aren’t biting. The method was banned in France in 2001, and Bulgaria followed suit in 2012, deeming the process environmentally unsound.

A few years ago, the Marcellus Shale was brought to the nation’s collective attention. The massive rock formation spans across Ohio, West Virginia, Pennsylvania, and New York – and many researchers claim that it holds up to 500 trillion cubic feet of gas, which is enough to power every home in the United States for half a century. The Marcellus Shale is a veritable energy gold mine. 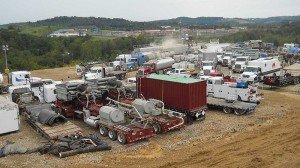 If it sounds too good to be true, that’s probably because it is. This fascinating infographic provides a visual explanation of the risks of fracking. Prepare yourself, because the laundry list is a long one. Energy companies often inject chemicals into deposits to coax the release of natural gas. The substances are poisonous to humans and animals alike – and if it seeps into drinking water, it could have a devastating effect on communities and ecosystems. To further complicate matters, energy companies are not required to illuminate the public on the chemicals that they inject into the rock. Ignorance is not bliss; it could leave affected areas grappling with massive health issues. The water used in the pressurizing process, referred to as brine, has an incredibly high salt content. If stored improperly, this substance can also leak into water holdings.

After the gas has been collected, the earth is left with massive amounts of salt and radioactive materials. The “disposal” method is where the most danger can occur; energy corporations release this dangerous substance deep within the Earth. The disruptive process has created earthquakes in eight areas around the country; if we continue to propagate fracking, this number will only continue to increase. 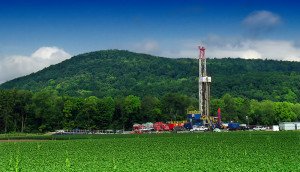 Natural gas is not “clean” energy. The extraction process releases methane into the atmosphere, and when we burn natural gas, it releases carbon dioxide. Both of these byproducts are the leading contributors to global warming. Fracking might provide an avenue towards energy that is less environmentally disruptive that coal or oil – but this does not make it clean.

Fracking is a temporary fix, not a solution. Our global community should be committed to sustainable innovations. And something that is not renewable, that carries enormous environmental and health implications, is simply not worth it. We live in an era of creativity – let’s focus on solutions that will help our planet in the long term, rather than hurt it.

Is Fracking our Greatest Solution, Or Our Greatest Mistake? was last modified: September 23rd, 2017 by Brian Peterson