The Two Sides of the Yosemite Rim Fire

In late August, a small fire began north of Yosemite. Within days, it had ripped through the landscape, reducing hundreds of thousands of acres to ash. What does the blaze mean to the future of California’s forests?

The fire was – and still is – huge. It began on 17 August, and by 27 August was larger in size than Chicago. So far, the Rim Fire has ripped across 237,371 acres, reducing 45,000 acres of Yosemite National Park to embers. Check out NOAA’s satellite photograph to see how the fire looks from space… the visual offers a way for people to understand the sheer size of the burn.

It also gave meaning to the cliche “spreads like wildfire,” ripping across the landscape so quickly that firefighters simply couldn’t keep up. Although over 4,000 people were tirelessly trying to contain it, their efforts were no match against the explosive growth of the blaze. The region holds some of our nation’s most beloved natural treasures, and the fire put them directly in harm’s way.

In addition to the extreme risk to flora and fauna, the Yosemite Rim Fire also threatened to leave nearly 1 million people without water. Eighty percent of San Francisco depends on the Hetch Hetchy Reservoir for their water supply. Located less than five miles from the blaze, the reservoir ran the risk of contamination and desiccation.

If you haven’t seen this stunning (and chilling) footage of the fire shot by the California National Air Guard, I would urge you to take a look. 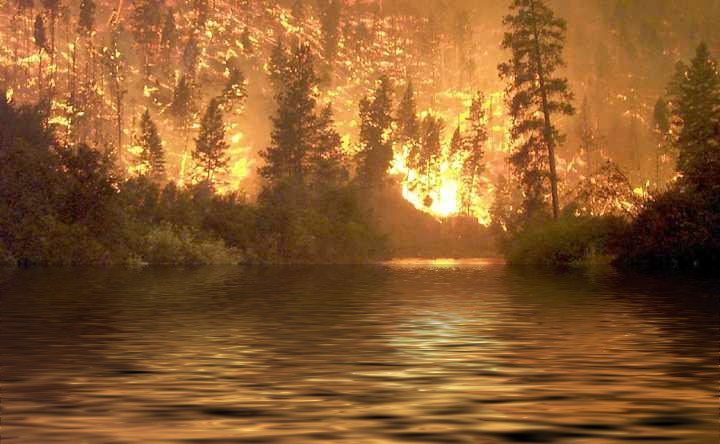 I know – A devastating forest fire doesn’t seem like an indicator for “good things.” Climate Desk has a great clip explaining how global warming fuels forest fires, indicating that climate change is thrusting our natural world into these devastating situations.

That being said, is it possible that there are any benefits to the Yosemite Rim Fire? In an interview with The Atlantic, U.S. Forest Service ecologist Carl Skinner noted, “Up until the middle of the 20th century, the forests of that area would burn very frequently. Fires would go through them every five to 12 years. Because the fires burned as frequently as they did, it kept fuels from accumulating.”

He notes that in the past 50 years, the desire to protect houses, preserved land, and commercial timber plots have overshadowed the need for controlled burn. In essence, forests become a glorified mass of kindling – and all it takes it a match for hundreds of thousands of acres to go up in flames. In this case, the burn was started by a hunter that built an illegal fire. 2002’s infamous Hayman Fire began after a woman burned love letters from her ex. When there is dead and dry matter accumulating for years, it doesn’t take an awful lot to get out of control.

Colorado State University ecologist Dan Binkley explains, “If you want to preserve something, you have to put it in a jar and pickle it. If you have a living forest, getting older and older, it’s not something we have an option to conserve in an unchanging way. Some fires are going to be necessary if we want to sustain these old forests.” Many foresters are hopeful that this massive blaze will help forests revert to their historical state, before controlled and low-level burns were prohibited. But only time will tell whether the Yosemite Rim Fire went over the tipping point, eclipsing “constructive” to be solely “destructive.”

The Two Sides of the Yosemite Rim Fire was last modified: September 23rd, 2017 by Brian Peterson